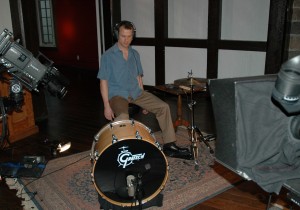 Matt Ritter took his first drum lesson at age 10. He quickly abandoned the idea when his teacher required him to play on a coffee can lid that, in no way, resembled the drumsets Matt was seeing on MTV. At age 15, he decided to give drumming a second try when he received a set of electronic drum pads as a gift. Matt was instantly hooked again, and within one month, he spent his savings to buy his first real drumset. It was a blue Remo set with untunable heads and cymbals that sounded like TV dinner trays!

Now that actual drums were part of the equation, drumming quickly became the most compelling force in Matt’s life. He ran home from the bus stop each day to practice for as many hours as possible before his parents returned from work. Formal instruction came in the form of lessons with Konrad Kaufman, a one-time faculty member of the Gene Krupa/Cozy Cole School of Drumming. Their lessons together often involved playing along to records by Louis Armstrong and West African drummer, Olatunji. Konrad also impressed upon Matt the potential of the drums as a powerful tool for personal expression. Matt was encouraged to explore his creativity by playing spontaneous solo music on the drumset. During this time, Matt joined the high school band, and within a year and a half of purchasing that blue Remo set, he was featured twice in his hometown newspaper and was chosen by jazz legend Rufus Reid to receive an award for outstanding musicianship. 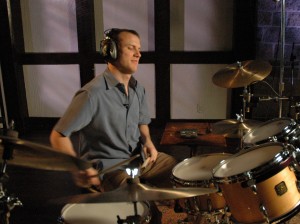 After high school, Matt went to college at the University of Hartford, where he studied music in the university’s Hartt School of Music. In addition to studying ear training, theory, and music history, Matt began to explore the world of jazz drumming by playing in various small jazz ensembles. Outside of the college curriculum, Matt continued to be active in a diverse range of drumming styles. He regularly traveled back to his home area of New Haven, CT to perform in rock clubs with Voodoo Cafe, a band he formed with his brother (on guitar) and other local musicians. He also commuted to New York every 2 weeks to study funk and Afro-Cuban drumming. It was during this time that Matt played for his first musical, a college production of The 1940’s Radio Hour. This type of theatre drumming would eventually become a major part of Matt’s playing career.

Toward the end of college, Matt did an internship as a production assistant for DCI Music Video (now called Hudson Music). DCI/Hudson was, and still is, the world’s leading producer of instructional drumming videos. The internship led to a 4-year association with DCI, giving Matt the rare opportunity to meet and closely observe many of the world’s greatest drummers. He was involved in the production of videos featuring Steve Gadd, Max Roach, Omar Hakim, Neil Peart, and countless others. Analyzing the playing of these drummers had a tremendous influence on the approach that Matt would later use in his teaching. This was also Matt’s first step into the realm of drum video production.

Upon graduating from the University of Hartford, Matt moved to New York, where he spent time further refining his skills with various instructors. Amongst them was legendary author/teacher, Jim Chapin. Matt’s lessons with Jim involved little more than a pair of sticks and a rubber pad (at least it wasn’t a coffee can lid!). The drumset, itself, was rarely used because the focus of Jim’s instruction was hand technique. Together, they analyzed the exact hand positions and movements necessary to achieve an effortless and efficient physicality at the drums. 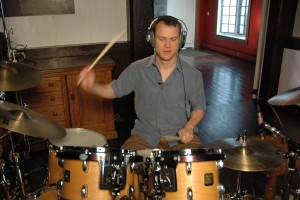 The vast majority of Matt’s work as a professional performing drummer has been in the world of musical theatre. Given the broad range of styles that Matt has familiarized himself with, this type of work is a natural avenue for him. Depending on the specific show, a theatre drummer may need to sound like a rock drummer, a jazz drummer, a parade drummer, a vaudeville drummer, or even a classical percussionist. The ability to read music is also a required skill, and fortunately, Matt’s earliest lessons involved reading sheet music.

During his theatre drumming career, Matt has played for regional theatre companies, subbed on an Off-Broadway show, and traveled to every corner of the continental United States with a national tour of Hello, Dolly. Throughout all of this, Matt has been fortunate to work with many tremendous performers, including theatre stars such as Kevin Gray (from Phantom Of The Opera), Kate Suber (from Titanic), Matt Cavenaugh (from Urban Cowboy and 2009’s West Side Story), Sharon Wheatley (from Les Miz, Cats, and Phantom), and cast members from State Fair, Miss Saigon, Fiddler On The Roof, The Producers, and many other Broadway hits.

During the winter of 1999-2000, Matt did a tour of the Caribbean, playing everything from Motown to disco to rock as the drummer for The Patt Holt Singers.

In New York, Matt has also been known to work as a jazz drummer, often with pianist/composer Rob Silverman. His gigs with Rob have allowed him to play with such people as Dave Jackson (Kenny Burrell, Roy Haynes, T.S. Monk), Patience Higgins (Duke Ellington Orchestra) and jazz great Ron McClure (bassist for Blood, Sweat, & Tears, Joe Henderson, and Sarah Vaughn, among many others).

From 2002 to 2003, Matt led his own group, Jazz of Now, featuring a host of tremendously talented New York City jazz musicians.

Between 2008 and 2009, Matt performed regularly around the New York City area with a rock band called WHIRL. 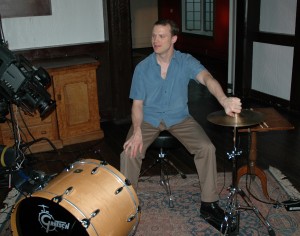 Ever since Matt got his first drumset, he has been excitedly passing on his drumming knowledge to anyone who will listen! His first “students” were his brother, his high school friends, and the son of an acquaintance of his mother. In 1996, this enthusiasm for spreading the love of drumming led him to begin a career as a teacher of private lessons. Since then, Matt has gone on to become one of New York City’s most in-demand drum instructors, sometimes teaching as many as 30 or more private students per week.

Over the years, Matt has taught people from all walks of life to play the drums. He has worked with children, young adults in search of a hobby, aspiring professional drummers, lawyers and business executives in need of a creative outlet, accomplished drummers looking to further refine their skills, and even a major drum star who is known and respected throughout the world.

Most of Matt’s teaching takes place in his own drum studio in New York, NY. From 2001 to 2005, he also taught private lessons as part of the after-school music program at the Lycee Francais, a private elementary school.

Many of Matt’s drum students can be heard performing in bands around the New York area. Some have also become involved in songwriting, working in the business end of music, and even passing the torch by teaching. At least two of Matt’s students have the distinction of having played at Carnegie Hall. One did a solo drumset composition as a featured performer when his high school band was given the honor of a Carnegie performance. The other performed on snare drum and timpani with a community orchestra that played to a full house at Carnegie.

In 2003, Matt was honored with an invitation to become a member of the Vic Firth education team. Around that same time, he also began writing articles for Modern Drummer magazine. His article entitled Unburying The Beater: Bass Drum Technique For Speed, Fluidity, And Dynamic Control has continued to inspire accolades and follow-up questions from drummers around the world. 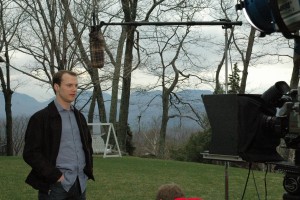 Ever since Matt saw Omar Hakim’s Express Yourself video in the early 1990’s, he has been a huge fan of instructional drum videos. This led him, in 1994, to begin working as a production assistant for DCI Music Video (now called Hudson Music). His first project with DCI was the Burning For Buddy series, featuring countless drum greats and offering Matt a crash course in video production. He did everything from transporting Neil Peart’s drums across Manhattan in a taxicab, to assisting with the shoot, to screening and pre-editing the countless hours of footage. Matt was also involved in such DCI productions as The Complete Cymbal Guide For The Drumset with Marvin “Smitty” Smith and the popular Drum Basics.

Now, long after his time with DCI, Matt remains as enthusiastic as ever about the possibilities of video as an effective learning tool. Bass Drum Techniques For Today’s Drummer: Unburying The Beater is his first venture as writer, producer, and featured artist. This bass drum technique DVD represents the best of what Matt learned from DCI about video production, combined with his own personal vision for the drum video world to come. 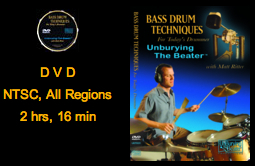